How you or your business can support democracy in America

Speak out and fight against voter suppression bills in the states

Help Voters Get The ID They Need

The right to vote is under attack in states across the country. Join the charge to protect voting rights in your community!

Click your state to learn how to take action today. Don’t see your state on the list? We need your support at the Federal level.

Congress has the opportunity to pass two important bills that would safeguard our freedom to vote and protect underserved communities from further attacks: the For The People Act and the John Lewis Voting Rights Advancement Act.

WHAT TO KNOW ABOUT THE JOHN LEWIS VOTING RIGHTS ADVANCEMENT ACT

Protecting Our Equal Right to Vote:

Voting rights are under attack in state legislatures, and Federal action is needed.

Congress has the opportunity to pass two important bills that will safeguard the freedom to vote and protect underserved communities from further attacks:

Ask your U.S. Senators to prioritize the For The People Act

The Arizona legislature is considering:

SB 1485, which will purge the highly-popular Permanent Early Vote List. Advocates estimate this could purge up to 200,000 voters—including 50,000 Latinx voters.

SB 1713, which would force Arizona voters to include personal information on their ballot envelopes, exposing them to unnecessary identity risk and making it harder for people to vote by mail. These new burdens will disproportionately jeopardize voters of color, Native voters, seniors voter, low-income voters, voters with disabilities, and military voters. Seniors are most likely to be among the 60,000+ registered voters who lack a driver’s license number on their voter registration; 1 in 5 people over 70 lacks a driver’s license. The bill does not appropriate funds to help these voters obtain the necessary identification.

SB 1106, which would create new ways to remove eligible voters from the rolls, including eliminating the requirement that counties “take the necessary steps to contact the voter at the voter’s new residence” when mail is returned as undeliverable. Instead, they would automatically be removed from the registration list. This bill also makes it a felony to forward a ballot to the voter, including family members forwarding ballots to students.

SB 1068, which will shift authority over elections from the Arizona Secretary of State (D) and the Governor (R) to the state legislature.

If you live and vote in Arizona, we need you to tell your legislators and leaders to vote NO on all of these discriminatory bills.

Ask your U.S. Senators to vote YES on the For the People Act

Call on Arizona businesses to stand up for voting rights!

Read the letter from over 30 groups calling on businesses to take a stand against the legislature’s attacks on Arizonans’ freedom to vote.

Show your support by reposting and amplifying this letter!

“Georgia Republicans’ shameful efforts to suppress the vote and seize electoral power through SB 202 demonstrate how critical the fight for voting rights remains. Every business, political, and civic leader must stand up and make their opposition to these desperate anti-democratic laws clear. At a time when Georgia ranks as the worst state for COVID vaccination rates, Georgia Republicans instead are singularly focused on reviving Georgia’s dark past of racist voting laws. And as the FBI continue to round up seditionists who spilled blood to defend a lie about our elections, Republican state leaders willfully undermine democracy by giving themselves authority to overturn results they do not like. Now, more than ever, Americans must demand federal action to protect voting rights as we continue to fight against these blatantly unconstitutional efforts that are nothing less than Jim Crow 2.0.” 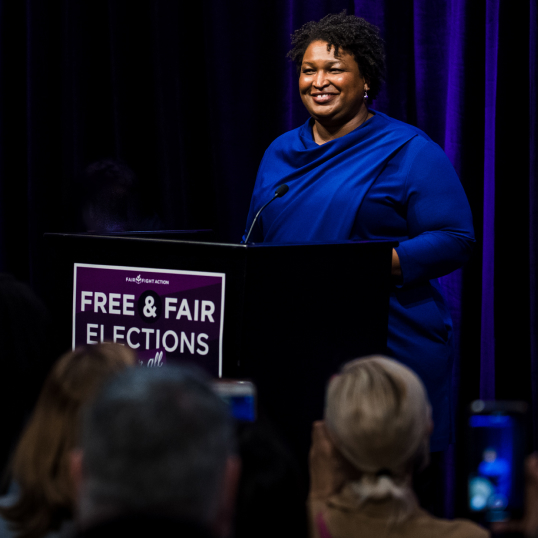 The tremendous activism and push back made this bill less harmful than it was at the beginning, but this bill is largely focused on intimidation and election administration power, and it creates processes to disrupt local control and certification.

If you live and vote in Georgia, we need you to call and email these Georgia Republican leaders and condemn their support of SB 202:

Ask your U.S. Senator to vote YES on the For The People Act, which recently passed the House

The Florida State Legislature is considering:

SB 90, which would ban drop boxes for mail ballots. Of the 67 county elections supervisors who run Florida’s elections, 66 opposed this bill. Drop boxes are a safe and useful way to deposit a ballot for seniors, at-risk communities, people of color, and those who work jobs with hours that make it difficult to turn their ballot in during normal business hours.

This bill also makes possession of mail ballots restricted to immediate family members. The current system allows a voter to designate someone to pick up or return a ballot. This proposed change would make it much harder for some people, like seniors, to vote.

A new report from All Voting Is Local also shows that Florida’s younger voters, voters of color, and newly registered voters were disproportionately more likely to have their mail-in ballots flagged for rejection.

If you live and vote in Florida, we need your help telling the legislature and Gov. Ron DeSantis that these bills are unacceptable:

The Michigan GOP has introduced a package of 39 voter suppression bills that would restrict our freedom to vote, including by:

If you live and vote in Michigan, we need you to tell your legislators and leaders to vote NO on all of these discriminatory bills.

Thanks to your advocacy, HB 429, which would have revoked college IDs as a valid form of identification at the polls in addition to requiring that colleges offer in-state tuition to students who vote in NH, was defeated. It’s a great start, and we could use your help to defeat the following bills:

And the following bills, which were retained in committee but will be picked up this summer:

If you live and vote in New Hampshire, sign your name to the New Hampshire Coalition for Voting Rights petition telling the legislature to reject HB 86, 531, 554, SB 54, and additional anti-voter bills

If you live and vote in North Carolina, sign this petition to tell your state legislator to vote NO on all of these discriminatory bills.

The Texas State Legislature is aggressively advancing several voter suppression bills. Two of the worst bills introduced are Senate Bill 7 and House Bill 6. SB 7 was voted out of the full Senate after over 7 hours of debate in the middle of the night/early morning hours of April 1st and now heads to the House. HB 6 was voted out of the House Committee on April 8th.

“Rather than attend to the needs of Texans the people leading this state are seeking to distract us with bills manufactured by Trump allies. Lawmakers are filing complex bills they don’t even understand, without inviting safe virtual testimony from the groups most affected by future suppression. These bills echo conspiracy theories that stoked voter intimidation and violence on a national level this past year.”

If you live and vote in Texas, use the call tool below to contact your representative to tell them to reject SB 7, HB 6, and the additional anti-voter bills

If you live and vote in Texas, we need you to call and email these Texas Republican leaders and condemn their support of SB7 and HB6:

Call your State Representative to demand that they oppose anti-voter bills, use this patch-thru link (available in English and Spanish) via Texas Organizing Project

Ask your U.S. Senators to vote YES on the For the People Act

Follow the Texas Civil Rights Project on Twitter and Facebook to get updates on the movement of these bills and what's happening on the ground. More actions are being added every day from organizations in Texas. Check out a running list of actions from Texas-based groups below:

There are more ways to get involved. Please consider making a donation to the following organizations fighting for voting rights in Georgia and across the country:

Coalition for the People’s Agenda
Contribute: https://www.thepeoplesagenda.org/ (click on donate button on the home page)

By providing your cell phone number, you consent to receive periodic text messages and telephone calls using an automated telephone dialing system and/or prerecorded messages from Fair Fight and Fair Fight Action with updates about the organizations. Text STOP to cancel, HELP for help. Message and data rates may apply. Privacy policy.